As you can probably guess from my previous post today has been a busy day for me but it was required for me to be able to enter the Beacon RCC Track day championships.

The championships was taking part on the Halesowen outdoor track, I’ve ridden the track once before as part of a training session for the Silverstone Team Time Trial I took part in so I had some experience of riding it on my road bike but I’d never tried it on a track bike and in some of the formats I was going to be taking part in today.

The championship started off with a 2 lap race we were split into 4 groups of 3 and the winner of each group would go through and the second and third place would race against each other again later on in the day to go through to the next round. I ended up coming second in my race which meant I was one of the ones that needed to do a second race to get through. 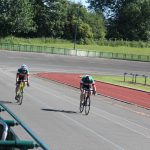 End of the first lap 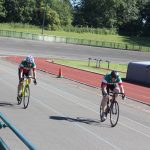 Its a close one 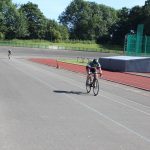 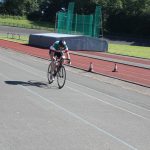 After the first set of races the children from the club were on the track and doing a 1 lap time trial, it was great to see them out there cycling you could really see that they were enjoying it.

After the children had finished it was then time for the 4km individual pursuit, this was a gruelling 8 laps around the track going as fast as you can. I really enjoyed this, it was tough but there is nothing quite like pitting yourself against the clock and seeing what time you can produce.

After the pursuit the children were back on again for a 1 lap handicap race and again they all looked like they really enjoyed it. We then had the adult repechage which is where I had to race again as I had come second in my first race. This time I managed to win this one meaning I got through to the next round 🙂

After this the children were on again this time in a handicap elimination / Devil event again another great effort by all taking part in this one.

Next up was the Sprint quarter finals another 2 lap race, I was up against Matt who is an absolute speed demon on the bike and a true gent. He easily had me on the sprint and that was the end of me for the sprint championships. But we still had one more event to do and that was the 20 lap scratch race. This race was all the adults starting off together and it was a race against each other over 20 laps first one through the finish line won. This was a great race and it was a battle between Matt and Gavin another excellent club rider and someone who has been doing really well on the track and crit circuit this year. These two battled it out for first and second place, it was a close race and Matt just managed to take it on the line I was near the back of the field but I had a smile on my face as I finished off.

I thoroughly enjoyed the day and the experience of riding a track bike and the way the events were run, it was great to see the children racing and see how well the youth kids system is doing at the club. It was also great to see so many Beacon members there taking part everyone had a smile on there face at the end of the day. Just have to wait now until I get my full accreditation before I can do some more track racing.